After I posted yesterday, I tackled the kitchen and all its surfaces. The night before I thought I felt a flea on my face in bed. Maybe I imagined it? Maybe not. I had bathed the dogs and applied their monthly dose of flea and tick killer yesterday. This is not a task to be taken lightly. My dream home would include a dog bathing station, counter height to spare my back. For now, I lean over the tub and use the hand held shower attachment to accomplish doggy cleanliness.

After I bathed Eddie, I sat on the toilet seat and dried him vigorously with his second towel, the first one soaked and on the floor. He has hairy toes, my Charming Eddie and I have attempted a good trim several times in the past. That hair around his toes and on the bottom of his feet gathers dirt and sand and distributes it on my floors and sheets. Eddie is quite vulnerable after a bath. He likes to be held close while I whisper sweet nothings in his ears as I clean them.

I took full advantage of his weakened state and grabbed a pair of scissors and clipped away all the hair. His feet are so cute now. He was not happy during the event, but I think he secretly likes the finished product.

Toni Louise could do with some trimming herself, but she was not apt to let me do it. But I digress. I sat down in my usual spot to tell HeWho about my real/imagined flea in the night and a real flea jumped on my arm in the light of day! NOOOOO!

This cannot be happening again. I lifted fat little Cujo onto my lap and flipped him over to check his underside for fleas. Cujo's short hair and coloring lend a perfect atmosphere for spotting fleas. The other three dogs, not so much. I checked his under-neck and behind his ears, then his armpits. Nothing. His fat belly skin was stretched tight and it was not until I checked his shriveled little scrotum that I saw flea dirt and two fleas!

What the what is going on? Remember, I just bathed him and then applied the monthly flea and tick PREVENTATIVE. This when HeWho started to complain that he had also been plagued by fleas. The man who notices NOTHING!

So we prepared the living area and put the dogs in the truck, the turtle on the porch and set off SIX foggers. Enough for 12,000 cubic square feet of space. Over kill? I even dispensed a can under my bed.

Then we drove away with our dogs and headed to Hiawassee to drive endlessly for two long hours. Actually, we stopped at a few thrift stores and HeWho sat in the truck with the dogs while I meandered to my heart's content. The first store was closed until Wednesday. Open thru Saturday. Then we headed to a bakery to check out the pastries and what they had to offer. Closed. Open Thursday thru Saturday. I saw this a lot during the winter, but was surprised that the hours didn't change during the season of tourists. The next thrift store was open and huge with two stories of junk to ponder. Smelled like old clothes. Not pleasant, but bearable. One never knows what one might come across at a bargain price. I found a choke chain for Eddie. He lost his, no, I am wrong. Cujo lost his and took over Eddie's. It was Oscar's old choke chain. Cujo knows not to try to escape from me and therefore does not get choked. Eddie, too. Toni Louise would, no doubt, choke herself, as would Bo. Bo because he is young and doesn't know better, Toni because she is not all that bright.

It was only $1. From there we hit a Farmers Market for boiled peanuts, a southern delicacy that HeWho is quite fond of. I fondled vegetables, but I have plenty from my garden. They had some plants, but I found them to be over priced.

Back home to air out the house and clean every surface again. Hours I could have spent in my She Shed. Fleas are nasty little parasites. Poor Cujo with have his underside inspected frequently from here on out. 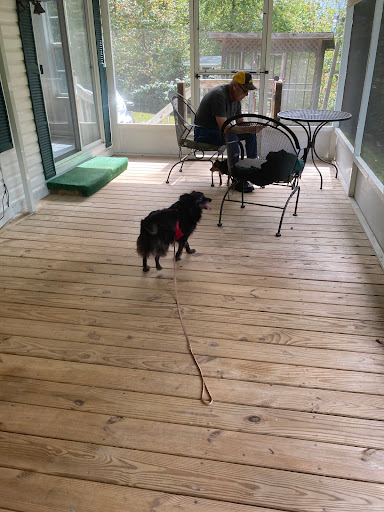 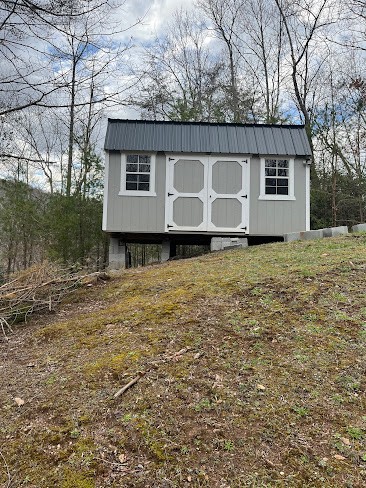 Stuck In A Holding Pattern 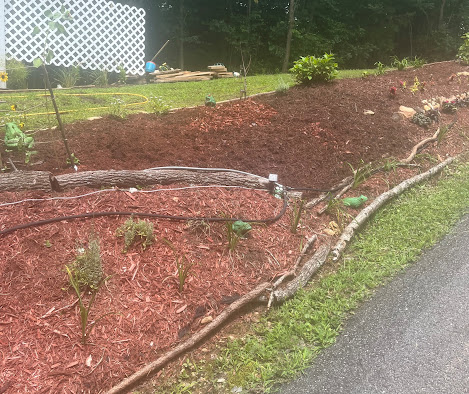 Still a work in progress, landscaping my She Shed "yard". But I made it all the way to the end!!!! I lost count of the number of bags of mulch I have spread. The past couple of days were spent on 7 bags and I have finally finished! Not that I won't pick up a few more bags, you know, just in case ... It goes without saying that I will never really be done. Gardens never are. But now this one is established and will be easier to fill with tons of color next year. You can see the beginning our our drive here. That sign says PRIVATE DRIVE. I put my chainsaw frog in front of it and today I will put our house numbers on it. I would have preferred a dog with very short legs, but the guy making it to pay us back for letting him have some downed trees said he had no idea how to make a dachshund, hence the frog. I am still confused about it, because if you can do an eagle, a cardinal or a frog, why can't you do a dog? Another view of my efforts later in the day when I hiked u
Read more